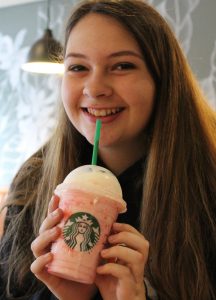 Oi! My name is Caleigh Johnson. Im 15 years old and I live in Delaware, Ohio. I am a sophomore at Hayes high school and love the classes I am taking and the people I meet in them. I am ecstatic to know that I am spending the 2018-2019 school year in Brazil. Outside of school I spend my time riding horses at a local barn with my closest friends. When I’m not at the barn, I enjoy being with my friends and making memories. I did not consider studying abroad when I was younger, but then I went to visit my sister, who also studied abroad, and suddenly had the desire to see the world. I hope to make lifelong friendships, become fluent in Portuguese, and immerse myself in the culture as much as possible. Rotary has provided this once in a life opportunity, and I could not be more thankful for how they and the Delaware rotary club has prepared me for this next step in my life. I can’t wait to see where this next year takes me!

Oiii!!! I’m coming up to my three month mark in Brazil and I can’t believe it’s already been that long! I have had such a wonderful time so far getting to know the people and the culture. My Portuguese is starting to pick up to the point where I can have a very basic conversation with people around me and I can understand a lot of what people are saying. Last Tuesday I went to my rotary club and I told them a little about how I was adjusting in my life here, I couldn’t say it all in Portuguese but majority of it I did. My rotary club hasn’t had much for community service this month but I did get to see all the other exchange students again. We went to an amusement park and spent the day there. It was so much fun and we got to know each other better than before. I also went and spent the night with the other American and a girl from France at the beginning of the month. We went to Oktoberfest and it was so much fun. I’m switching to my second host family today and I’m nervous but also really excited, I really like my host mom now but in the second family I’ll have a host sister and more people will be around the house, so It’ll be like my house in the US and I’ll be more used to it. I’m getting more comfortable in my school, I still can’t speak with a lot of the students very well but we find ways around the barrier and I’ve gotten to know them a little better. I’ve gotten a little homesick this past month but nothing too bad, I just stopped talking to home as much and I was pretty good after that. I can’t wait to see where the next couple of months take me.

Boa tarde!! This past month I have done so many things, it’s felt like it’s gone on forever and flew right past me. My school ended at the end of November but my class and I had a big secret Santa on December first with all the teachers and students. On the 5th we went to a clubhouse on the beach and stayed there for a day, it was lots of fun and we all got really burnt. I have met up with some of the other exchange students recently and we go to the beach, go shopping, and watch movies. My host family owns their own business so we had a big secret Santa with all of the workers, it was so much fun and funny to watch people get the gag gifts from their secret Santa. My host sister and I watched my other host sisters daughter, she’s three, and that was an experience. I got to go to a graduation of my host sisters friend, it was good to see the differences between and American and Brazilian graduation. For Christmas we have gone to the beach until January 2end, we have  been here for two days and I’ve already had so much fun, I’ve gone body surfing, and my host cousin said he’d take me surfing for real, I’ve gone swimming in the biggest waves I’ve ever seen, I’ve tanned. We plan on going jet skiing and ride a “banana boat” soon. On New Years we will spend the day and night at the beach and when it hits 12 we will jump seven waves for seven wishes and throw rocks into the ocean. I’ve had such a wonderful time this month and my Portuguese has picked up quite well. I’ve been a little homesick but not nearly as bad as I thought I would be. I’ve gone to a few rotary dinners and meetings, it has been lots of fun and I can’t wait to see where the next months take me.

Bom dia!!! What a month January has been. I started the new year on the beach with my family and friends, we jumped waves and wrote things in the sand, it was marvelous. We then stayed at the beach for another few days then went home. After a day or two back home we then went to the farm house to relax some more. I got to see a lizard that was about the size of my arm. My host sister and I went to a water park for a day and just spent the day riding slides and swimming. We came home after a few days at the farm house only to go off to another vacation. This one though was at a farm in the middle of nowhere. I finally got to ride a horse after months and months of not doing it, it was wonderful and I miss it again. The farm had dogs and one dog was so sweet, he was blind but got around really well and every-morning when I woke up he was sitting at the door waiting to be pet. The farm had rows of flowers where my host sister and I took many pictures. After that we went the island for another day at the beach, I’m getting very tan now and I love it, it was fun. The only way to the beach is by boat or by walking for about three hours. It was fun, I got to see and swim in a waterfall and I bought most of the gifts that I’ll give to my family when I return. We spent a week at home and then we went to a house with a bunch of people from my host family. There we went to the beach and went on hikes, we went on one hike that lasted for almost three hours and went around a beach, it was beautiful and amazing. After that we headed home and I started packing to move to my third family. I switched family’s at a rotary banquet, it was held at my third family’s beach house and I’ve been here since. I can go to the beach across the street whenever, I’ve watched a bunch of movies, we went jet skiing with my host parents friends and it was amazing. I’ll be going back to school on the 12th of February and while I’m excited to go back to see the students and teachers again I’ll definitely miss sleeping in and summer break in general. I’ll be going to more meetings now for rotary because this family is very active in the meetings and it’ll be easier for me to go now.

This past month has flown by so quickly. It’s insane how close to the end it is. At the beginning of the month I was still with my third host family, but around the 10th I moved in with my fourth family. So far I’ve really liked it, it’s a big family and there is always someone around. We go to the beach a lot, my host dad took me kayaking to a island not far off from the beach house and I got to snorkel and see the local sea life. School has been going pretty good too, I can understand the teachers a lot more than I could at the beginning of the year. For Easter I stayed with my host uncle, aunt, and their daughter. It was really nice, we went to the big family owned house and all my host family went to just spend the day together. We played beach tennis, hung out in hammocks, ate a bunch of churrasco, and went swimming.  My friends and I went to see the Avengers and it was amazing, we spent the day at the mall and then saw the film. This upcoming week I’m going on a trip with my host dad, he has work in another city and he offered to bring me along. I’m super excited for the next two months and already dreading coming. So far it’s been amazing and it can only get better!